Posted on December 17, 2019 by Mauricio Bugarin 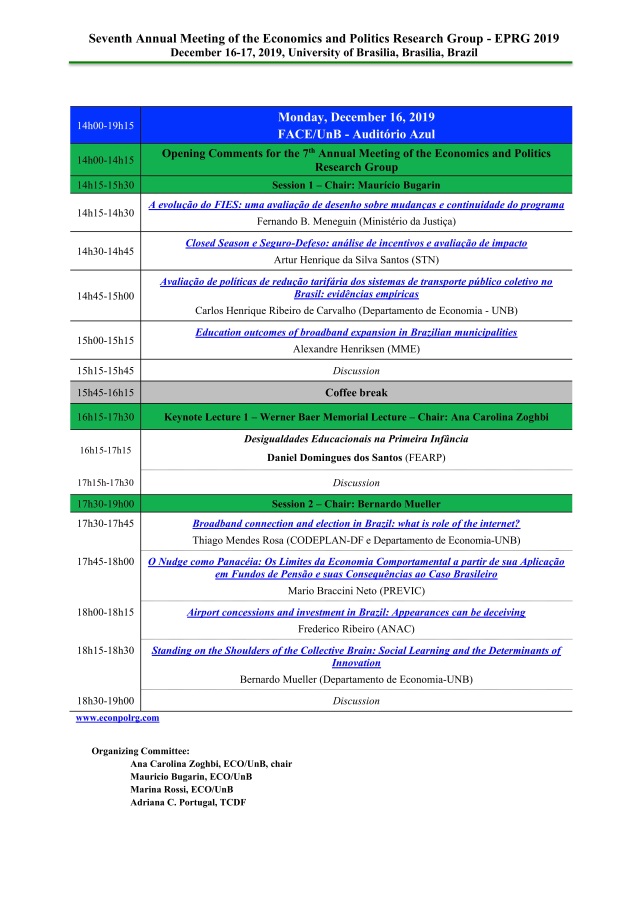 Mauricio Soares Bugarin is full professor at the Economics Department of the University of Brasilia, Brasilia, Brazil. He received his PhD from the University of Illinois at Urbana-Champaign in 1997 and is currently Leader of the Economics and Politics Research Group (CNPq-UnB). From 2006 to 2011 he was full professor of Economics at Insper Institute, São Paulo, Brazil, where he served as the director of undergraduate studies in Economics and created the joint degree program in Economics and Business Administration. Prof. Bugarin is a research fellow of the Brazilian National Research Council (CNPq) and served as a member of the Standing Committee of the Latin American Chapter of the Econometric Society from 2007 to 2011. He has produced numerous research articles published in peer reviewed journals, including the Journal of Mathematical Economics, Oxford Academic Papers, Public Choice, and Social Choice and Welfare; a book on the control of public expenditure in Brazil published by the Konrad Adenauer Foundation; several academic book chapters; and has received several academic prizes including Brazilian National Treasure Secretariat Prizes (Public Finance), a National Health Economics Prize, and the Haralambos Simeonides Prize for the best article in Economics published in a year by a Brazilian author. Prof. Bugarin’s main interests include public economics, public finance and the relationship between economics and politics. He regularly teaches PhD courses in game theory and mechanism design, the economics of incentives and information and positive political economics.
View all posts by Mauricio Bugarin →
This entry was posted in EPRG Annual Meetings. Bookmark the permalink.